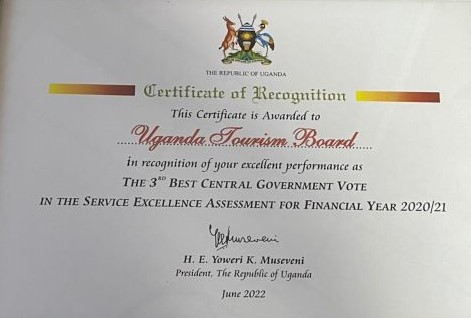 Uganda Tourism Board (UTB) has emerged 3rd in the central government service excellence assessment for Financial Year 2020/21 by the Ministry of Finance,Planning and Economic Development (MoFPED. The awards to the excelling institutions were announced September 13th 2022 during National Budget Conference for the Financial Year 2023/24 budget strategy at the Kololo ceremonial grounds at a function presided over by the Prime Minister Rt. Hon.Robinah Nabbanja who represented the President.

The awards are in accordance with the programme based approach to planning and budgeting which mainly focuses on results that deliver change in the well- being of citizens. Uganda Tourism Board was ranked 3rd in central government vote category with Uganda Prisons and Public Service commission coming first and second respectively. Masaka Referral hospital was 4th while Equal opportunities commission was ranked 5th  position.

UTB CEO, Lilly Ajarova was delighted to receive the award on behalf of UTB and congratulated staff upon that recognition. “This is evidence that our efforts to be an efficient, resulted oriented institution are starting to bear fruit as we deliver on our mandate,” she noted. This award comes eight months after the launch of the country’s newly refreshed brand identity Explore Uganda, The Pearl of Africa.

The brand launched by H.E President Yoweri Kaguta Museveni in January this year seeks to align Uganda as a gifted number one tourist destination.
The overall objective of the Financial Year 2023/24 budget strategy will be to restore the economy back to the medium-term growth path of 6-7% percent per annum, improve competitiveness that sustain Uganda’s socio-economic transformation agenda.

The UTB Chairman Board of Directors Hon. Daudi Migereko applauded government for recognizing Uganda Tourism Board as one of the top performing government institutions in Uganda and pledged to continue prioritizing value for money in all planning aspects of the institution.